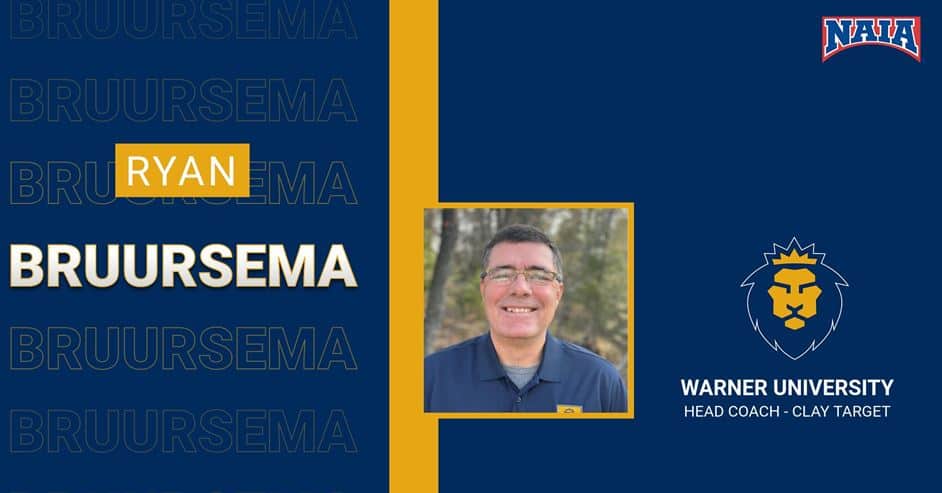 In July 2022 Ryan Bruursema will take over as head coach for Warner’s Clay Target Shooting Team. Ryan has been a competitive shooter for 25 years and has served as assistant coach to the Upper Peninsula of Michigan’s own Delta County Crushers Trap team for five years.

Doug Elmore started the Clay Target Team as a club sport in 2019. In Fall 2021, it became an official collegiate sport for Warner. Elmore and the team worked hard to get their own facility this past year. In Spring 2022, the facility was built behind the soccer field on campus. Coach Elmore will remain on staff as an assistant coach.

Chrissy Moskovits, Athletic Director believes “the partnership both Coach Elmore and Coach Bruursema have built over the last year has been a blessing. Their work together as we continue to build our Clay Targets program and facilities is extremely important.”

Coach Bruursema grew up as a missionary kid in Papua New Guinea. While attending boarding school, he developed a love for sports. Shooting primitive bow & arrows often allowed him to develop excellent hand-eye coordination which in turn sparked his love of all shooting sports. In 1996, he attended his first sporting clays event in Michigan and was hooked immediately. After many tournaments, he traveled to shoot in the US Open in 2002 and took second place in his class. Currently, in B class, Coach Bruursema continues to move up while earning punches in registered shoots.

After serving in the United States Marine Corps Coach Bruursema met his wife, Cathie, in Holland Michigan, and they have been married for 33 years. They will be residing in Babson Park and their son Nickolas will be attending Warner University and will be a member of the Clay Target Team this fall.

“Ryan will bring a great amount of experience to our Clay Target program. His passion for building disciples and furthering the Kingdom will be a seamless transition. We welcome Ryan, Cathie and Nick to the Warner Family,” said Moskovits.