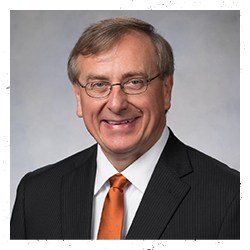 Dr. W. Kent Fuchs, President of the University of Florida, will give the Inaugural Address at the Inauguration Ceremony of Warner University’s Third President, Dr. David A. Hoag on November 4 in Lake Wales.

Dr. Kent Fuchs became the 12th President of the University of Florida in January 2015. Under President Fuchs’ leadership, the university has developed shared goals for the decade ahead. UF’s overarching aspiration is to be a premier comprehensive university that the state, nation and world look to for leadership.

Previous to the UF presidency, Dr. Fuchs spent six years as provost of Cornell University. He was appointed provost after serving as Cornell’s Joseph Silbert Dean of Engineering. He joined Cornell from Purdue University, where he headed the School of Electrical and Computer Engineering from 1996 to 2002.

President Fuchs earned his doctorate in electrical and computer engineering from the University of Illinois, and a master of divinity from Trinity Evangelical Divinity School in Chicago. He credits divinity school with teaching him communication and community-building skills, and to balance his innately analytic perspective with a deep appreciation for people and for human relationships. He also holds a bachelor of science in engineering from Duke University.

Dr. Fuchs is married to Linda Moskeland Fuchs, an art historian whose scholarship centers on the sculpture of sarcophagi created in the first centuries of Christian art-making. Mrs. Fuchs has two master’s degrees in art history, from the University of Chicago and Cornell, and a third in Biblical studies, from Trinity Evangelical Divinity School. The Fuchses have three sons and a daughter, Micah, Eric, Isaac and Christine, as well a daughter-in-law, son-in-law, and two grandsons.

Born on an Oklahoma farm in 1954, President Fuchs spent much of his youth in Alaska before moving to Miami, where he graduated from Miami Killian Senior High School. His two younger brothers and stepmother live in South Florida.

President Fuchs will be giving the address at the Inauguration Ceremony of Dr. David A. Hoag, which will take place at the First Baptist Church of Lake Wales on Nov. 4 at 10 am. Dr. Hoag has been in the role of President of Warner University since May of this year and came to Warner from Trinity International University in Illinois.